Jesus Christ is our Heavenly High Priest, and He officiates in the Sanctuary in Heaven, which the earthly sanctuary is patterned after - 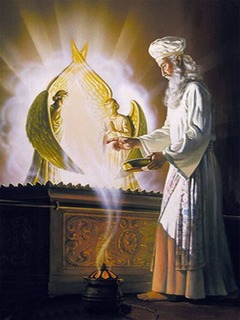 1. Now of the things which we have spoken this is the sum: We have such an high priest, who is set on the right hand of the throne of the Majesty in the heavens;

2. A minister of the sanctuary, and of the true tabernacle, which the Lord pitched, and not man.

1. And take thou unto thee Aaron thy brother, and his sons with him, from among the children of Israel, that he may minister unto me in the priest's office, even Aaron, Nadab and Abihu, Eleazar and Ithamar, Aaron's sons.

30. And thou shalt anoint Aaron and his sons, and consecrate them, that they may minister unto me in the priest's office.

3. For every high priest is ordained to offer gifts and sacrifices: wherefore it is of necessity that this man have somewhat also to offer.

4. For if he were on earth, he should not be a priest, seeing that there are priests that offer gifts according to the law:

3. And by reason hereof he ought, as for the people, so also for himself, to offer for sins.

4. And no man taketh this honour unto himself, but he that is called of God, as was Aaron.

5. So also Christ glorified not himself to be made an high priest; but he that said unto him, Thou art my Son, to day have I begotten thee.

6. As he saith also in another place, Thou art a priest for ever after the order of Melchisedec.

10. Called of God an high priest after the order of Melchisedec.

1. For this Melchisedec, king of Salem, priest of the most high God, who met Abraham returning from the slaughter of the kings, and blessed him;

11. If therefore perfection were by the Levitical priesthood, (for under it the people received the law,) what further need was there that another priest should rise after the order of Melchisedec, and not be called after the order of Aaron?

12. For the priesthood being changed, there is made of necessity a change also of the law.

13. For he of whom these things are spoken pertaineth to another tribe, of which no man gave attendance at the altar.

14. For it is evident that our Lord sprang out of Juda; of which tribe Moses spake nothing concerning priesthood.

15. And it is yet far more evident: for that after the similitude of Melchisedec there ariseth another priest,

16. Who is made, not after the law of a carnal commandment, but after the power of an endless life.

17. For he testifieth, Thou art a priest for ever after the order of Melchisedec.

18. For there is verily a disannulling of the commandment going before for the weakness and unprofitableness thereof.

19. For the law made nothing perfect, but the bringing in of a better hope did; by the which we draw nigh unto God.

20. And inasmuch as not without an oath he was made priest:

21. (For those priests were made without an oath; but this with an oath by him that said unto him, The Lord sware and will not repent, Thou art a priest for ever after the order of Melchisedec:)

22. By so much was Jesus made a surety of a better testament.

23. And they truly were many priests, because they were not suffered to continue by reason of death:

24. But this man, because he continueth ever, hath an unchangeable priesthood.

25. Wherefore he is able also to save them to the uttermost that come unto God by him, seeing he ever liveth to make intercession for them.

26. For such an high priest became us, who is holy, harmless, undefiled, separate from sinners, and made higher than the heavens;

27. Who needeth not daily, as those high priests, to offer up sacrifice, first for his own sins, and then for the people's: for this he did once, when he offered up himself.

28. For the law maketh men high priests which have infirmity; but the word of the oath, which was since the law, maketh the Son, who is consecrated for evermore.


Jesus' Heavenly High Priest ministry is also better than any earthly Priest’s ministry, because it is based on a better covenant and better promises –

6. But now hath he obtained a more excellent ministry, by how much also he is the mediator of a better covenant, which was established upon better promises.

7. For if that first covenant had been faultless, then should no place have been sought for the second.

9. Not according to the covenant that I made with their fathers in the day when I took them by the hand to lead them out of the land of Egypt; because they continued not in my covenant, and I regarded them not, saith the Lord.

10. For this is the covenant that I will make with the house of Israel after those days, saith the Lord; I will put my laws into their mind, and write them in their hearts: and I will be to them a God, and they shall be to me a people:


1. For the law having a shadow of good things to come, and not the very image of the things, can never with those sacrifices which they offered year by year continually make the comers thereunto perfect.


4. For it is not possible that the blood of bulls and of goats should take away sins.


Our Heavenly High Priest officiates in a greater and more perfect tabernacle than the earthly tabernacle .