Three Days And Three Nights
In The Heart Of The Earth

Before Jesus's crucifixion the Pharisees asked Him to show them a sign. He responded with what is called the "Sign of Jonah" -

39. But he answered and said unto them, An evil and adulterous generation seeketh after a sign; and there shall no sign be given to it, but the sign of the prophet Jonas:

Now Jesus prediction, the Sign of Jonah, of three days and three nights in the heart of the earth has caused a lot of discussion about whether or not he was really crucified on Friday and rose on Sunday.

What day does the Bible say Jesus rose on?

28. In the end of the sabbath, as it began to dawn toward the first day of the week, came Mary Magdalene and the other Mary to see the sepulchre.

1. Now upon the first day of the week, very early in the morning, they came unto the sepulchre, bringing the spices which they had prepared, and certain others with them.

2. And they found the stone rolled away from the sepulchre.

3. And they entered in, and found not the body of the Lord Jesus.

1. The first day of the week cometh Mary Magdalene early, when it was yet dark, unto the sepulchre, and seeth the stone taken away from the sepulchre.

How do we know this 1st day is not the day after a feast day?

We know because the Bible does not say the 1st day of the feast of ___.

Now the first day of the feast of unleavened bread the disciples came to Jesus, saying unto him, Where wilt thou that we prepare for thee to eat the passover?

In regards to the three day prophecy of the Sign of Jonah, which day does the Bible say Sunday the 1st day of the week was?

The Bible says it was the 3rd day.

In the story of the two walking to Emmaus, which occurred on the same day Jesus rose from the dead (Luke 24:10-13), Jesus appears unto them and asks why are they sad. They respond that only a stranger in Jerusalem wouldn't know about the things which had happened there. And Jesus says, "what things"? And they respond -

19.... Concerning Jesus of Nazareth, which was a prophet mighty in deed and word before God and all the people:

SO JESUS ROSE ON SUNDAY THE THIRD DAY OF THE PROPHESY OF THE SIGN OF JONAH. 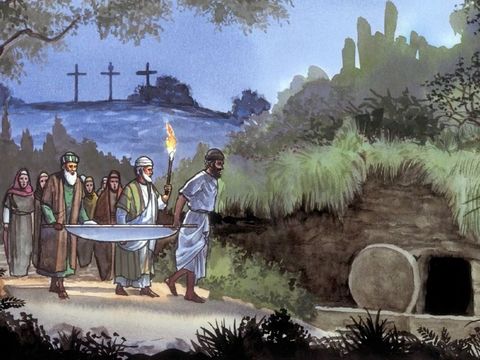 When was the preparation day?

52.This man went unto Pilate, and begged the body of Jesus.

53. And he took it down, and wrapped it in linen, and laid it in a sepulchre that was hewn in stone, wherein never man before was laid.

54. And that day was the preparation, and the sabbath drew on.

31 The Jews therefore, because it was the preparation, that the bodies should not remain upon the cross on the sabbath day, (for that sabbath day was an high day,) besought Pilate that their legs might be broken, and that they might be taken away.

So if Sunday is the 3rd day per the disciples on the way to Emmaus, the Sabbath was the 2nd day, then that makes Friday the preparation day the 1st day.

How do you get the 3 nights?

Well we would have to question whether Jesus' statement of 3 days and 3 nights in the heart of the earth meant the tomb. I have read various interpretations. One said it meant Jerusalem; another interpretation is that it is the hands of wicked men.

On the road to Emmaus when the disciples were describing to Jesus what had occurred in Jerusalem, they state that it was the 3rd day since these things had been done. What things are they talking about?

31. And he began to teach them, that the Son of man must suffer many things, and be rejected of the elders, and of the chief priests, and scribes, and be killed, and after three days rise again.

22. Saying, The Son of man must suffer many things, and be rejected of the elders and chief priests and scribes, and be slain, and be raised the third day.

17. And Jesus going up to Jerusalem took the twelve disciples apart in the way, and said unto them,

18. Behold, we go up to Jerusalem; and the Son of man shall be betrayed unto the chief priests and unto the scribes, and they shall condemn him to death,

19. And shall deliver him to the Gentiles to mock, and to scourge, and to crucify him: and the third day he shall rise again.

1. betrayed to the chief priests and scribes

3. mocked, scourged, and crucified by the Gentiles

4. rise on the third day

The Hebraism meaning of "heart" is the center of moral, spiritual, or intellectual life. Would Jerusalem be considered the heart of spiritual life?

The prophecy of 3 days and 3 nights of the Sign of Jonah is fulfilled if we count from the time Jesus was betrayed which was Thursday night.